Comment on the latest draft
of occupational health and safety standard ISO 45001
31 March 2015
A new international standard on occupational health and safety management is currently under development with publication expected in October 2016. The second committee draft of ISO 45001 – Occupational health and safety management standard systems – requirements with guidance for use is now open, with UK comments requested by 1 May 2015. This follows the re-drafting of the standard to reflect comments received from the September 2014 public consultation.
BSI, the UK’s National Standards Body, has worked with experts from around the world to develop the second draft and now invites interested parties to register their comments online: https://drafts.bsigroup.com/Home/Details/54548. All comments submitted will then be considered by a panel of UK experts before BSI submits the national position to the international committee.
Occupational health and safety continues to be a priority across the world. Despite extensive regulation, existing standards and guidelines, work-related disease still kills millions globally each year, with hundreds of thousands more fatalities caused by workplace accidents. The international committee developing ISO 45001 includes experts from over 55 countries, 14 observer countries and around 20 liaison bodies, all with knowledge and practical experience of occupational health and safety issues and the challenges faced. The new standard is designed to replace the widely-used OHSAS 18001 whilst also taking into account other key documents and discussion points from around the world. Ultimately it intends to provide a single, clear framework  for organizations of all types and sizes who wish to improve their OH&S performance and protect those working on their behalf or who may be affected by the organization’s activities.
ISO 45001 is being developed using a collaborative, consensus-based approach taking into account the views of large and small organizations, government bodies, trades unions and worker representative organizations. To ensure the widest possible input is received from stakeholders BSI has taken the unusual step of making drafts available to the public at every stage of development. Usually, this would only happen once, half way through the process.
ISO 45001 has been written to a core structure and common text defined by ISO for use by all management system standards. The core structure will ensure that the new standard is broadly aligned to the forthcoming revisions of ISO 9001 and ISO 14001 – thus helping those who are implementing multiple management systems.
Anne Hayes, Head of Market Development for Governance & Risk at BSI, said: “Occupational health and safety is a matter of importance for all businesses worldwide, regardless of their size or sector. It is not an issue that can be ignored especially when it can literally mean life and death for many.”
To read and comment on ISO CD2 45001 please visit BSI’s draft review site:
https://drafts.bsigroup.com/Home/Details/54548
The draft is also available from the BSI shop:
http://shop.bsigroup.com/ProductDetail/?pid=000000000030323155

[…] The headline news has been that voting failed on the ISO 45001 Committee Draft. With a two-thirds majority needed for a Draft standard to proceed, there were 29 approvals and 17 disapprovals. However, a ‘no’ at this stage simply means that a majority of the voting countries believe there is a need to improve the draft further before it can go to the next stage.
This situation is not out of the ordinary; during the development of the new version of ISO 14001 expected next year, a second Committee Draft was created and this will happen with ISO 45001 once the Committee’s Working Group meets to discuss submitted comments. […]

[…] “Behavioural safety doesn’t resolve workplace health and safety problems, it buries them. It finds workforce scapegoats, not management solutions,” said the ITUC in a statement. […]

[…] The standard was initially expected to be adopted before the end of 2016. 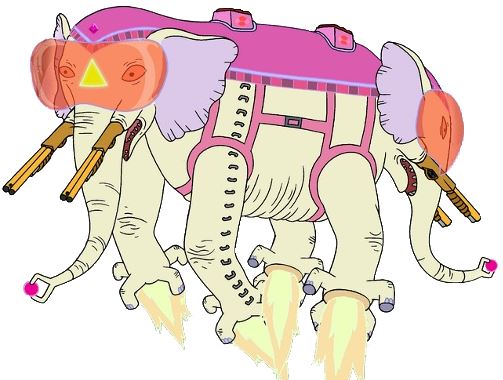 Our profession is awash with myths, told by dubious people with overt agendas and gobbled up by an unsuspecting public. The problem with myths is they usually come from cultures in decline, while progress is driven by fact and practicality. Ask the Mesopotamians how that whole Marduk thing worked out; you’ll have to dig in the ruins of Babylon to find out, since it doesn’t exist anymore.
Shmowzow!
Within the ISO standards world, we are constantly confronted with the notion of the “integrated management system” or IMS. Like the mythical griffin, Quetzalcoatl or Ancient Psychic Tandem War Elephant, the IMS is an amalgam of existing creatures, all glued together and presented as if the whole is greater than the sum of its parts. It supposes that companies opt to weld their qualty, environmental and safety management systems into one bulging mass, using ISO 9001, ISO 14001 and OHSAS 18001 to do so. The most recent versions of the myth decorate the resulting amalgam with nurnies of ISO 22000, ISO 27001 and an assortment of other standards. […]

[…] Now it is through the Annex SL mandate, affecting all ISO management system standards from here to eternity.
ISO itself has begun to self-perpetuate the myth, going so far as to incorporate it into the New Work Item Proposal for the future ISO 45001 standard, which is set to replace the OHSAS 18000 standard (which is not an ISO standard.) That document drops the “i-word” a few dozen times.[…]

I couldn’t stop drawing your attention to this.
See also: https://www.google.com/search?q=”Annex+SL”+”ISO+45001″

A draft international standard on health and safety at work failed to secure the necessary two-thirds majority vote in the International Organization for Standardization (ISO) committee developing it on 18 October. It will now have to be reviewed and voted on again. This is a battle won by the unions against provisions that would leave workers worse off.

The International Trade Union Confederation (ITUC) spoke out against the draft standard (ISO 45001) on occupational health and safety management systems in mid-October, claiming that it is at odds with International Labour Organisation (ILO) occupational health and safety (OHS) conventions. The ITUC’s call was backed by Public Services International and other international trade union federations who had been critically monitoring the standard’s development and even questioned why there should be one.
The ITUC argued that the draft was designed to shift responsibility for any workplace safety and health incidents onto the workers when worker participation in OHS administration and management had been written out, and that adopting it could lead to “a blame-the-worker system”.
“Behavioural safety doesn’t resolve workplace health and safety problems, it buries them. It finds workforce scapegoats, not management solutions”, inveighed the ITUC in a press release
By contrast, the draft was particularly business-friendly. A July 2014 version omitted any reference to employer responsibility for OHS, something deeply unwelcome to the ILO which had signed a Memorandum of Understanding with the ISO in August 2013 stating that the standard should not be inconsistent with ILO conventions which, like EU laws (the 1989 Framework Directive) require employers to ensure the health and safety of their employees.
The ITUC reports that only four of 83 experts involved in the working group hammering out the draft are from workers’ organisations.
The standard was initially expected to be adopted before the end of 2016.The unions have no plans to let up the pressure because this simply delays, not defeats, the standard.
While the early decades of the ISO’s existence were focused mainly on developing technical standards, the past thirty years have seen it venturing increasingly into other areas. In the late 1980s, the ISO adopted its first standards on quality management systems – the well-known ISO 9000 standards – followed by others on the environment, human resources management, etc., some of which are in direct competition with legislation, particularly in social matters. Standards of course are private instruments with no legally binding authority, but in fact, a growing number of laws do refer to them, sometimes leaving no option but to implement them – a trend condemned by the ETUI in an issue of its HesaMag health and safety at work magazine published in early 2013.
Read more:

ISO bid to ‘privatise’ safety standards
A draft standard on safety management being prepared by the International Organisation for Standardisation (ISO) could be seriously bad news for workers, unions have warned.
When ISO decided in 2013 to proceed with its own international standard for an Occupational Health and Safety Management System – ISO 45001 – both the International Labour Organisation (ILO) and unions were alarmed, and objected forcibly to ISO’s intrusion. Unions say ISO does not have an expert mandate in occupational health and safety, and unlike ILO doesn’t have to listen to those who have. The latest draft of the standard, being steered through by a working group chaired by the British Standards Institute (BSI), heightened concerns, with mentions of “workers” almost entirely removed and “worker participation” not part of the package.
TUC head of safety Hugh Robertson commented: “We need strong standards on health and safety but we have ones already. These were developed by the International Labour Organisation and agreed with unions, employers and governments worldwide. They put workers and worker involvement at the heart of any standards.” He warned: “The attempt by ISO, led by the British standards body BSI, to develop separate standards which were not wanted by either employers’ or workers’ representatives, amounts to the privatisation of health and safety regulation. The unelected standards bodies, most of which have no involvement of people who actually understand the world of work, are simply trying to develop a product that they can market and make large sums of money certifying.”
He added: “I do not see anything in the current proposals which will drive up standards. Instead they will undermine the existing standards, including the management standards the HSE has developed in the UK, which are far better.” Sharan Burrow, head of the global union federation ITUC, said: “ISO must be made painfully aware that a standard that ignores the critical role of affected parties in its design and implementation, which undermines ILO standards already in place and which could give an ISO stamp of approval to blame-the-worker systems just won’t work.” She added: “This isn’t about a piece of paper, it is about workers. ISO would do well to remember that.”

Update 2015-04-02: One major critizism was “unelected standards bodies”. This may be the reason that BSI again opened the discussion to the public in March 2015. However, voting started before that discussion is finished. This turns the discussion into a farce. Seemingly BSI wants to stick to the introduction timing intended for ISO 45001 by all means.
Also I am curious whether measures have been taken to secure the required two thirds vote for the 2nd committee draft. Almost any kind of interested party can participate in the committee. That looks “democratic” at the first glance, but participation requires ressources (e.g. time and money). This could give employers the opportunity to secure two thirds of the vote just by spending the money to send sufficiently more business and industry representatives into the committee. This is plutocraty, not democracy.

[…] Under ISO’s new standard, company management would have absolute control combined with zero responsibility. It is an approach at odds with modern safety laws and all accepted and effective occupational health and safety management practice. The experts advising ISO knew that. But forget consensus; ISO is acting as censor. […]